It has been a long past several weeks of watching someone I love really go out of his comfort zone .. sticking his neck out to do the right thing.

It hasn’t been easy.

And that is an understatement.

But the goal has always been, a healthier situation for the three children he and his ex-wife brought into this world together.  And for them all as a family, even in divorce.  So he’s stuck it out.  And stuck to the issue.  And shut out the noise of others working against him/others walking in his same shoes.

‎”Never bend your head. Always hold it high. Look the world right in the eye.”

The South Dakota Senate today passed House Bill 1055, a bill that aims to do what is in the best interest of children by working toward 50/50 placement whenever and wherever  possible.  It may not be the bill the Cowboy and others had hoped for.  Because it still only encourages a judge to give both parents equal placement when its in the best interest of a child.  But there were concerns the companion Senate bill went a bit too far. 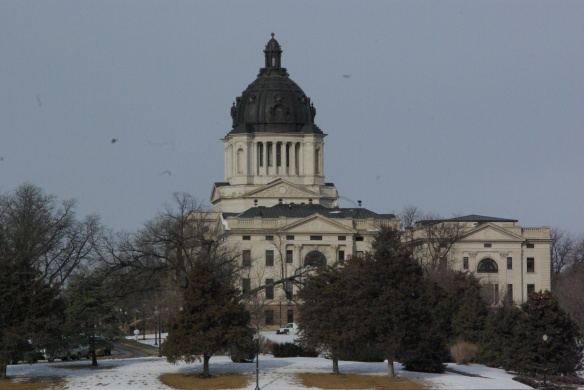 Maybe it is big.  Maybe even this small change will ripple further than anyone realizes.  Who can tell what the impact will be for children to spend more equal time with both parents and their families.. families who love and want to help raise them, parents who are encouraged through this legislation to better get along, to co-parent in a manner currently not fostered in the state of South Dakota.  Who can at this moment, fully appreciate what that will mean and the impact it will have on a child?

It is both sad yet wonderful everything involved with this discussion, *every letter written, every piece of testimony, will remain a matter of public record.  Because someday, the Cowboys children will understand just how hard their dad fought for them..  how much of a stand he had to take, to simply do what one might think would come natural – and that’s be their dad.

I don’t know that anyone reading this blog is among those I feel compelled to say something to, but:

On behalf of the Cowboy, a sincere thank you to all who worked hard for this, from the other dads, moms and grandparents who testified, to those who wrote in, to the legislators who took a stand, who came back at this year after year, who held meetings and who have been studying the issue to try and get it right this time.  Is it right?  We will see.  But still, thank you.  Thank you to the other dads who for years, have done their best to pave the way toward change.  Thank you especially .. to the legislators who fought hard to be the voice for so many children and families in your state, who otherwise might feel like no none cares that they are hurting.  And, for making sure dirty politics weren’t played today as best you could, for thoroughly understanding both sides of an issue because you had today, information from both sides.  Thank you for what may be seen as only a small victory by some.

I’m hoping in one little corner of South Dakota, that small victory will someday soon .. grow into a big fat wonderful opportunity for a good man to have more time, less stress, less conflict and all the space possible to love his kids.