The Cowboy’s daughter said to him last night, “Good job, dad,” as they were leaving the rodeo.. 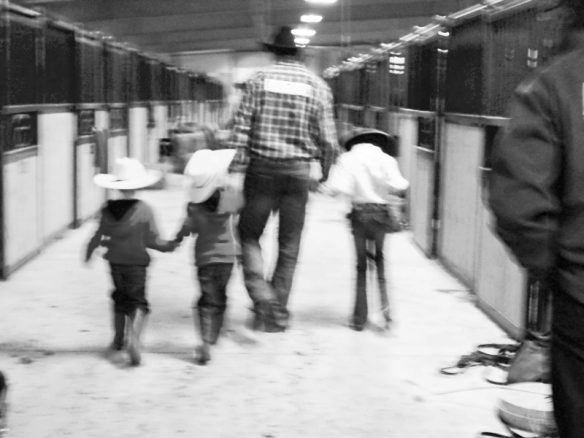 The Cowboy, doesn’t like to miss.  He missed last night.  His partner broke the barrier. Disappointed, he thought this might be an opportunity to remind himself of a good lesson.. and one to teach his kids.

“I’m a little rusty,” he told her.  “And I didn’t prepare.  You do your best by being prepared, by practicing.  Not by just doing your best the one day you go do something.  That’s true of a lot of things.”

I’m getting a recap this morning via the videophone .. it’s good to see him again.

According to the Cowboy, his horse hadn’t been roped on in six months.  He himself, had roped only a few times the past couple of weeks.

He said he had been thinking on the drive there last Friday, not to expect much.

“I can go to the practice pen right now and never miss.  When you’re a team roper you have a  partner that relies on you.  You feel bad.”

The past year has meant big changes for the Cowboy, changes that had him scaling far back from a whole lot of roping and riding.

Until that point however .. his family and the rodeo had been his life.  He spent most of his time, from what I gather .. on the road working, roping, hosting schools.  Things were tough at home because he was gone.  When he was home things were tough.  Something many of us, in various ways, can relate to.  We wonder .. how much more could we have put into a marriage, a job, a hobby or a sport .. and where would that leave us now?  Or would it have changed anything.  Had we ‘practiced’ more.  Focused.  Been better prepared and known then what we know now.

One can only guess – sometimes.

What we do know for sure is, and we were chuckling about how universal the message is this morning.. you can’t change anything looking back.  In life.  Or in the rodeo.

“Don’t expect much if you don’t put out much,” said the Cowboy.

More laughter.  That can be taken so many ways ..

I think the old saying goes, ‘Don’t expect much, if you don’t put in the work’ .. but his phrase might be more fun to use.

Either way .. as I sit here eating a cupcake for lunch .. wondering why I’m struggling still to lose weight.. I’m thinking, touché.