Roping clinic of the season #2.

Often, when people with horses .. or cowboys travel to any sort of competition or rodeo .. they sleep in their horse trailer.  Or a hotel nearby. 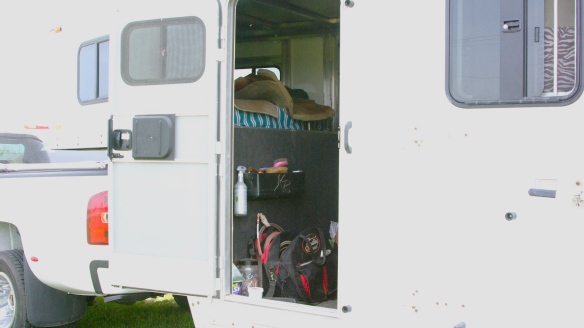 We awoke this morning at a B&B.

The Cowboy had no idea this is where we would be staying nor has he ever stayed at a B&B.  He pulled into town yesterday and one of the other guys in town for the clinic, a good friend of his, had booked it for us.

Think though, that he enjoyed it, for what little time we spent there.  Very nice couple.  Beautiful home.  Cozy accommodations.  Great breakfast.  Couple cats and a dog roaming the house.  Makes us feel right at home.  (Although their dog and cats appear much better behaved than mine, so not quite the same, but close.)

Anyway, we woke this morning, grabbed a cup of coffee and flipped on the Today Show for a few minutes before breakfast.

(Following link isn’t the Today Show’s interview, but couldn’t find their official version online yet, so here’s just a link to the story.)

“I got caught up in a cactus when I was a kid,” says the Cowboy.  “And no one ever felt bad for me and put me on tv.”

We both bust out laughing.

“Are you serious?” I asked him.

“I am.  Instead of Cactus Jack, I could have been known as Cactus (his name),” he says chuckling.

“How the heck did that happen,” I pried for details.  “And, where is my computer?  This, I need to write about.”

Apparently he was rolling down a hillside at his grandfather’s ranch in western South Dakota, in the Black Hills.  Something he and his brothers had done on occasion.  And this particular day, he happened unfortunately .. upon a patch of cactus.

“No one was there to help pick them out of my face,” he said.  Kind of pouty.

We are both now laughing somewhat hysterically.  Trying to keep some level of quiet given we are at the B&B which doesn’t seem to be all that soundproof and it’s early.   “I had to pick them out one by one all by myself.”

While a painful memory, time has healed all cactus wounds.  And this morning’s story on so many levels, while very sweet, (you really should go watch it) gave us a good laugh.

Off to the clinic.