People always worry its a man that’s abusive in a relationship.

People often don’t believe there’s no abuse taking place if a hand isn’t risen.  Or that it hasn’t been documented.

I’m worried tonight .. ahem, this morning, about the Cowboy.

I may have no just cause.

Because when certain people feel attacked and like they are losing control over a situation, they lash out.  Words and actions become even more irrational than they may normally be.  Things go awry.

The Cowboy is finally taking a stand against behaviors and a situation that if done to a woman, no one would hesitate to cry foul.

He doesn’t really care at this point, to address any of what’s happened to him .. and the kids in the past.  Or to her.  He hopes the fact the final paperwork has finally arrived and the divorce is final will allow everyone to move on.  But the one thing that does need to be addressed, is time with his kids.  The three things .. the three little people that mean the most to him in his life, he now sees four whole days a month.  He has to be creative to get any more time with than that.  And at every turn, he is often deliberately shut out.  Every turn.

A man who is a good and loving dad, and wants to be a part of raising his children, should not have to fight for what should be his to begin with, and that is time to love and raise his kids.

Somehow, according to the ex, that is just wrong.  And there is every effort being made on her part at this point to silence him.

Hell hath no fury like a woman who’s been scorned.

The Cowboys effort has never been to take their children away from their mother.  Has never been to smear her name.  Has never been to raise awareness that abuse comes in many forms and perhaps reveal testimony, facts and a judges findings to the public so both sides can be presented here.  None of us wants to drag anyones name through the mud like its somehow acceptable for others to do right now when it comes to the Cowboy.

While he has stayed the course and kept his message, along with every other person that testified yesterday before God and South Dakota state legislators about the need for both parents to have equal time with their children wherever and whenever possible, only two felt the need to bring in personal attacks.  And they were both women who will do anything to get their way.

One, seems willing to go to just about any length to ensure no one gets time with her kids, but her.

The other, a South Dakota State Senator, should be ashamed of the tactics deployed today.  But we expected nothing less.

We pray.  We hope someday things for everyone get better in this scenario.  And we, along with so many others who respect and stand alongside the Cowboy, are trying like crazy to stay about it all.

But in the quiet .. still night .. out in the Plains of South Dakota, there is a man, a woman feels very threatened by.  Not because he will raise a hand to her.

But because he is good.  And strong.  And fighting fair, unlike what either of them .. or many others for that fact, may have ever done in their marriage.  And deep down she has to know the mission he is on, is right.

I’m worried about the Cowboy.

I have been referring the past few posts to Pierre and a trip the Cowboy and I have been planning on taking to the capitol.. versus what was supposed to have been a weekend in Arizona with friends.

We stayed home because the Cowboy, devastated by the ongoing trials he is being confronted with in regard to any time with his children .. we would like to say, have to stop. But there are few resources it seems available, if any, besides an attorney. And even that, for decades, we’ve learned has gotten father’s (and some mothers) like the Cowboy, who simply want to care for, help raise, love, support and be a part of their children’s lives after divorce, nowhere. In fact, its been so disheartening, many have dropped the fight.

But could there be hope?

There is a lot of discussion right now happening around a bill scheduled to be reintroduced into the South Dakota state legislature. But perhaps not enough discussion..

The fight for shared parenting and legislation to support it, has gone on now for years here in the Mount Rushmore state. Judges, attorneys and the like here .. have maintained for generations that what is in the best interest of the children of divorce, is majority time with one parent, leaving the other with little to say, little time to do anything with their kids and little recourse.

But elsewhere, even in my own home state of Wisconsin where joint legal custody is the norm, the Cowboy would have had at least a chance to fight.

South Dakota’s shared parenting legislation is lagging behind approximately 38 other state’s who have long adopted the principal that parents going through divorce come to the table on even ground. That equal time with both parents is in the best interest of the child (other than in cases where there is abuse). And that the burden of proof for any arrangement otherwise lies with the parent filing for majority custody.

Somehow those ideals just don’t seem right to those representing people like the Cowboy. Or at least it seems that used to be the case. We’re hoping the times baby, they are a changin’. 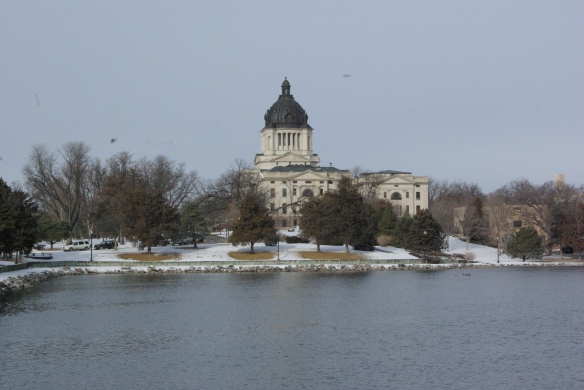 The Cowboy hopes by sharing his story.. legislators in his home state may finally reverse some of the pain he and his children have been put through .. and if not for them, for the other fathers (and mothers) that will inevitably follow in his footsteps.

It’s been a couple years since the Cowboy was last in Pierre. He often will rope in the Fourth of July Rodeo. And he’s won it several times.

We’re hoping today is a win too..