I might have sat down to write last night ..

But the mess we came home to after a couple of birthday parties for family and friends kept me busy for far too long.  There will be no photos of it.

“I’ve said this before.  The dogs need to be outside,” says the Cowboy.  “Dogs belong outside.”

He went to bed.  I, for over an hour, cleaned up a trail of foul smelling excrement throughout the house.  Our four kids all huddled in the one bedroom upstairs that didn’t need cleaning and fell asleep.

How many ranches have indoor dogs?  Not many, I believe. 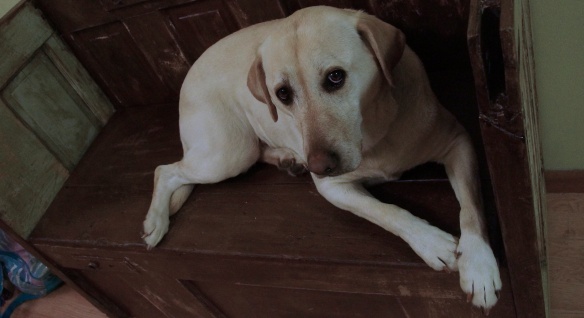 The Cowboy has never had an indoor dog, hates the hair in the house, can’t stand that one of my dog sneaks as often as it can onto the bed to nap and hates coming home to a mess (one of our pups can not leave anything alone that might be left on the kitchen counter, including butter, which in turn makes her sick.  Have you ever smelled dog vomit after they’ve downed a stick of butter?  Not cool.  I still don’t know what caused last nights unbelievable mess.)

But I’m used to it, I guess.  I have had indoor dogs all my life and don’t see where there are issues that can’t easily be overlooked or overcome.  I’ve cleaned up accidents and illnesses since I was old enough to take on the responsibility and .. I have until now, always lived within city limits and not wanted a dog to bug the neighbors with its barking.  Plus people that live in towns/cities tend to think if you leave your dog out for any length of time or take your dog anywhere in the car with you it’s their job to call Animal Control.  Somehow that dog is being abused or abandoned, I’m thinking is their typical most educated guess on the subject.  I have to say, my dogs would any day, rather go with me and sit in the car for hours on end than stay home if I give her the choice.  They otherwise just appreciate being around people.  To a fault, I guess.

I’m getting off topic.

Indoors or send them outside?  I feel the need at this point, mid-winter, to wean.  Which isn’t fast enough it appears, for the Cowboy.  Especially after last nights mess.  I don’t think they’re ready for it, my very small opinion as the smaller of our two labs comes in shaking from 15 minutes in the cold on days like we’ve had recently.