We were grabbing lunch the other day with a girlfriend of mine.. and I’m not sure how the topic came up.

But the word ‘lasso’ flew into the conversation..

“Uh oh,” I thought.  And I started laughing.

“If you don’t want to look like a greenhorn,” says the Cowboy…

“Don’t call it a lasso.  People from the city are always calling it a lasso,” he says to her, very seriously.

We all start laughing.  Me, in part because I made the same mistake early on in this relationship.  And I’m not sure I’ll ever live it down.

From Wikipedia, the free encyclopedia

/ˈlæsoʊ/ or /læˈsuː/), also referred to as a lariat, riata, or reata (all from Spanish la reata), is a loop of rope that is designed to be thrown around a target and tighten when pulled. It is a well-known tool of the American cowboy. The word is also a verb; to lasso is to successfully throw the loop of rope around something. Although the tool has several proper names, such terms are rarely employed by those who actually use it; nearly all cowboys simply call it a “rope,” and the use of such “roping.” Amongst most cowboys, the use of other terms – especially “lasso” – quickly identifies one as a layman.

A lariat is made from stiff rope so that the noose stays open when the lasso is thrown. It also allows the cowboy to easily open up the noose from horseback to release the cattle because the rope is stiff enough to be pushed a little. A high quality lasso is weighted for better handling. The lariat has a small reinforced loop at one end, called a honda or hondo, through which the rope passes to form a loop.

The honda or hando.. for the record, doesn’t sound like it looks apparently.  Cowboy says it’s pronounced (hahn-doo)…

The Cowboy grew up roping.

When he was just 3 or 4, he says he would hop on a crazy horse named Chief, with his dad, and they would ride about 5 miles through the pastures to a neighbors house.  To roping club.

The Cowboy says if he remembers right, Chief was ugly as sin.   (A little side note there.)  But, a good horse.

It was a weekly competition.  Apparently anywhere from 20 to 30 guys would show up.  They kept track of how everyone did, kind of like a league.  And at the end of the year, they gave away a buckle.

“Did you love it?” I asked as we were talking about what I might write.

“I did.  It was good.  I just grew up with it.  Roped all through school.  For a few years when we moved to town, I quit.  But when they bought another place in the country… my uncle got us all started again.  I haven’t stopped since, I guess.  Until now.” 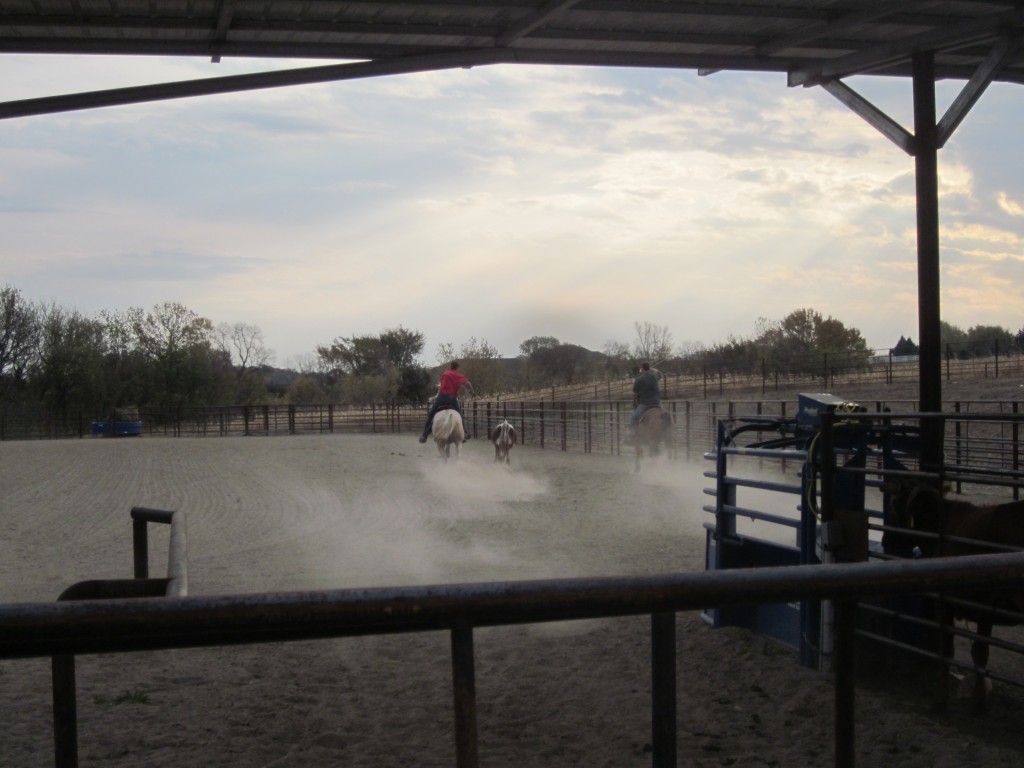 The Cowboy’s earned quite a few buckles in his career.  He made it to state time and again in high school ..  roped all through college and was team roping professionally, until the divorce.  He didn’t want to be gone on weekends anymore or traveling when he might have a chance to see his kids.  And life with the rodeo, is apparently, a life on the road.

He is still on the road quite a bit, back and forth between South Dakota and Wisconsin.  In fact, he grabbed his coat just this morning.. and headed for home.

He gets a few hours tonight with the kids..

And he loves that they .. are the ones now picking up the rope.

In fact, my daughter, since meeting the Cowboy has learned quite a bit.

Even she reminds me;  Real cowboys use a rope.  When you’re above your head and its a in a circle, its still not called ‘a lasso’.  It’s called swinging your loop.

I can still hear her.. the last time I messed up and called it the wrong thing, and then asked, ‘why, again’?

I believe that’s the same answer (minus the ‘mom’ reference) I gave the other day, to my girlfriend.